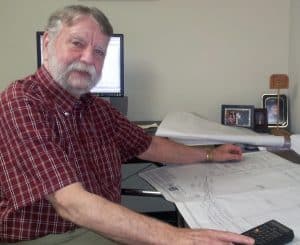 Savannah, GA – It is with great sadness that we share the loss of our dear friend and colleague, J. Michael Sims, RLS, who served the firm for 47 years. He was a beloved husband, father, brother, uncle and an active member of his community. It was a pleasure to have known him and our thoughts and prayers go out to his family. As a tribute to Mike, we have shared a portion of the conversation from his 40-year interview in 2013 commemorating his life and legacy with the firm. He is missed already:

From 1980 to 2013, J. Michael Sims, RLS, served as the Director of Surveying for Hussey, Gay, Bell & DeYoung with responsibilities including the supervision, coordination, logistics, and planning of all boundary, topographic and hydrographic survey work required by the firm in core market segments including water/wastewater, transportation and municipal. Under his direction, the Surveying Department was involved in the development of several of the region’s most prominent developments including The Landings on Skidaway Island, Savannah, Georgia; Palmetto Dunes, Hilton Head Island, South Carolina; and WaterWays Township, Richmond Hill, Georgia. Mike could say what few other employees could – he worked for every letter in the original HGBD name – Roy Hussey, Ben Gay, Gus H. Bell, III, and Buddy DeYoung. Mike joined the firm in June of 1973 at the age of 26. He began his career as a Survey Draftsman and when asked why he decided to pursue surveying, he laughed, “It was picked for me.” Forty years later, he still enjoyed the business of surveying. “It’s all about loving what I do and the people you deal with, even the engineers. I won’t say I planned to be here for 40 years, it just evolved.” As one might guess, one of the most prominent changes Mike had experienced during his career had been the evolution of technology. Top three surveying tools in 1973? Mike replied without hesitation: “Hand-held calculator, scale, grid paper, scotch tape, and a light table,” and added, “If you didn’t have a light table, you used the window back then.” He recalled the first computer the firm employed for surveying – a computer located in Atlanta at the Fulton National Bank. When asked one word he’d use to describe it, Mike didn’t skip a beat saying, “archaic,” and then added, “surveying hasn’t changed since they laid out the pyramids, the methods by which we gather and process data has changed tremendously, but the basics of horizontal and vertical measurement remain the same.” That said, when asked what is one thing related to surveying that technology has not replaced, Mike smiled and replied, “Very simple, cutting line. To date technology has not come up with a substitute for good old-fashioned line cutting and in a southeast Georgia swamp, that can be quite challenging.” Effective December 31th of 2013, Mike officially retired; however, he stayed on, at a reduced schedule, in an advisory role with the firm. When asked how many surveys he had completed in those 40 years, he looked startled, paused for a moment and then replied, “Thousands. No one’s ever asked me that.”