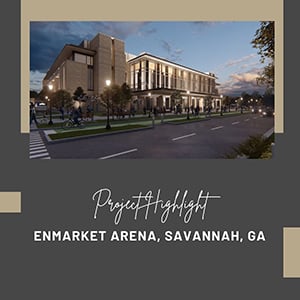 Savannah, GA – The Enmarket Arena represents the culmination of nearly 20 years of efforts to construct a first-class, sustainable arena that provides a flexible and usable sports and entertainment venue to the public. Originally funded by the City’s 2014 SPLOST 6 program, in 2019, the City of Savannah selected the design team led by Perkins & Will to provide design and construction administration services for the development of a 10,000-seat, 269,000 SF arena on the City’s west side.

The development of the new $165M arena site is considered the catalyst project in an overall effort to develop the entire surrounding canal district – a 55-acre area to the west of Savannah’s historic downtown core that presents the opportunity to reimagine the Canal District to the west of West Boundary Street, creating a vibrant new center of activity. The multiphase project aims to revive an under-appreciated canal and expand Savannah’s economic vitality.

“I think this arena is the missing piece. If you look at it, it’s such a great hospitality city. It’s such a great destination for people to go, but people have to leave here to go to shows well, they don’t anymore,” said Mr. Peter Luukko, Co-Chairman of OVG Facilities, while attending the Enmarket Arena Ribbon Cutting & Community Day.

The Canal District around the Enmarket Arena is expected to feature a 55-acre park with lakes, walking and biking paths, and athletic fields. The total project cost for the arena and site work including surface parking is $165M. As a subconsultant to Perkins & Will, Hussey Gay Bell provided site/civil engineering including grading, drainage, erosion control and on- and off-site utility designs for this new arena and associated ancillary parking in addition to surveying, permitting and construction phase services. Hussey Gay Bell also assisted Perkins & Will with the overall Canal District master plan and public outreach.

AECOM/Hunt served as the CM-at-Risk on the project, which reached completion in February 2022.