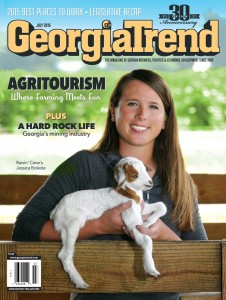 Pooler, Georgia – Back in April, Pooler announced that it would be undertaking major rebuilding and revitalization projects for the city. The grand new three-story city hall and separate court building will rise at the back door of the old municipal building. Developers who want to bring in new businesses will get support from the city. “We’re kicking it off as a revitalization of the Highway 80 corridor,” says Pooler City Manager Robbie Byrd, as the sounds of demolition work on a nearby building filter in through his office window. “We could have gone to the [Pooler] Parkway, but if we did that we would just have abandoned old Pooler.” Work on the new $17.3-million municipal and justice buildings got underway this summer. It will be home to city departments that have been scattered around the area or crammed into the old city hall. The police department will occupy the first floor with other agencies on the second. The top floor will house the council chambers and mayor’s office.

The new structure will be situated almost on top of the existing facility. In fact, construction of the broad front steps and columned front entrance won’t be completed until after the old building is finally demolished. Until that’s completed, city workers and visitors will have to enter through what will become the rear entrance of the building. “The front steps for the new building are actually going to be where my office is now,” says Byrd. Court will no longer be held in city hall, but will move to the new building just across the parking lot. The goal is to create a main street overlay district that will be able to offer a variety of incentives for people and businesses to move back into the old city center. Byrd and other city officials see old buildings being renovated and given new facades. With permit fees such as those for water hookup eliminated, renovating downtown buildings should be much more attractive.

“It took years for the city to accumulate the whole block,” explains G. Holmes Bell IV, chairman and CEO of Hussey Gay Bell, the firm designing the new complex. “And all the people and all the growth has been out around Pooler Parkway, and to a lot of people it would have made sense to locate the city hall out there. But with a lot of thought and a lot of meetings, it made a lot more sense to revamp all of historic Pooler by centralizing this project right here in the middle of the city.”

The project reflects the growing realization of many cities that they must find ways to rejuvenate their central cores if they want to prosper. “It would encompass a common thread of removing a lot of the blight that’s there now,” says Bell. “It would also rejuvenate the entire area with the new restaurants and retail as well as residential units that it’s really lacking now.”