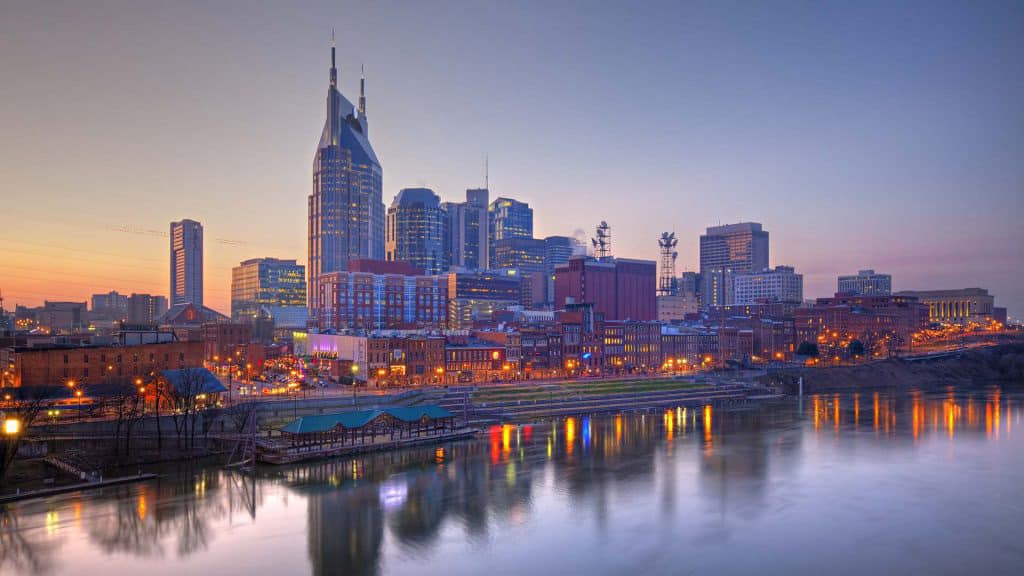 Nashville was founded by James Robertson and a party of Wataugans in 1779, and was originally called Fort Nashborough, after the American Revolutionary War hero Francis Nash. Nashville quickly grew because of its prime location, accessibility as a river port, and its later status as a major railroad center. In 1806, Nashville was incorporated as a city and became the county seat of Davidson County, Tennessee. In 1843, the city was named the permanent capital of the state of Tennessee.  By 1860, when the first rumblings of secession began to be heard across the South, antebellum Nashville was a very prosperous city. The city’s significance as a shipping port made it a desirable prize as a means of controlling important river and railroad transportation routes. In February 1862, Nashville became the first state capital to fall to Union troops.  Though the Civil War left Nashville in dire economic straits, the city quickly rebounded.  Within a few years, the city had reclaimed its important shipping and trading position and also developed a solid manufacturing base. The post-Civil War years of the late 19th century brought a newfound prosperity to Nashville. These healthy economic times left the city with a legacy of grand classical-style buildings, which can still be seen around the downtown area.  It was the advent of the Grand Ole Opry in 1925, combined with an already thriving publishing industry, that positioned it to become “Music City USA”. In 1963, Nashville consolidated its government with Davidson County and thus became the first major city in the United States to form a metropolitan government. Since the 1970s, the city has experienced tremendous growth, particularly during the economic boom of the 1990s under the leadership of Mayor Phil Bredesen, who made urban renewal a priority.

Named one of the 50 Best Places to Travel by Travel+Leisure, today Music City USA boasts a strong and rapidly expanding economy – coupled with its rich history and landmarks like the Country Music Hall of Fame, the Nashville Public Library downtown, the Sommet Center, and Nissan Stadium, it’s no wonder Nashville is coming into its own.   We like to think the Nashville Convention & Visitors Corp.  says it best:

“Flowers, film and, of course, music. These are just a few of the things that are celebrated during Nashville’s many annual events…Live entertainment (natch) is on tap every single day!”

Top Things To Do While Working For Us In Nashville

Since a very young age, there have been two things I have been and continue to be passionate about – reading and writing or more articulately, the power of language.