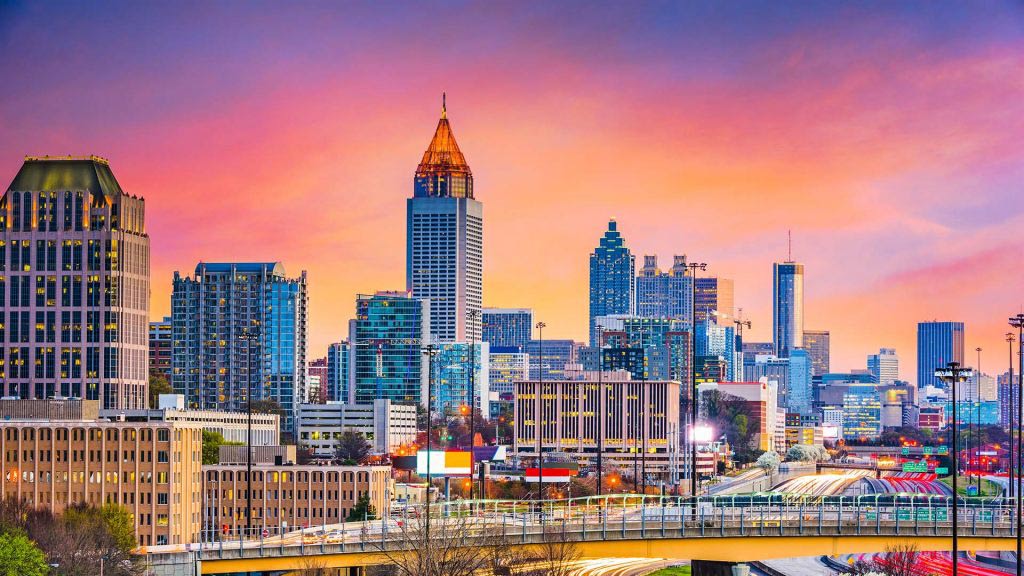 The history of Atlanta dates back to 1836, when Georgia decided to build a railroad to the U.S. Midwest and a location was chosen to be the line’s terminus. The stake marking the founding of “Terminus” was driven into the ground in 1837 (called the Zero Mile Post). In 1839, homes and a store were built there and the settlement grew. Between 1845 and 1854, rail lines arrived from four different directions, and the rapidly growing town quickly became the rail hub for the entire Southern United States. During the American Civil War, Atlanta, as a distribution hub, became the target of a major Union campaign, and in 1864 Union William Sherman’s troops set on fire and destroyed the city’s assets and buildings, saving churches and hospitals. After the war the population grew rapidly, as did manufacturing, while the city retained its role as a rail hub.

Today, Atlanta’s growth continues to sprawl in all directions and according to the US Census Metro Atlanta gained the fourth-most residents in the nation in 2016 with 90,000+ new residents.  It’s one of the most diverse cities in the country with hundreds of sites to see, fantastic civic and cultural amenities including the new home for the Braves at SunTrust Park and the new Falcons home at the Mercedes-Benz Stadium coupled with a robust public transit system to take you from one adventure to the next.   We like to think the Atlanta Convention & Visitors Bureau says it best:

“In Atlanta, fine dining, shopping and rich history combine with inspiration-inducing attractions to create a city with Southern charm and world-class sophistication. It’s easy to see why Atlanta, Georgia is one of the most popular destinations in the Southeast to live and to visit.”

Top Things To Do While Working For Us In Atlanta

I think I knew I was going to be an architect or civil engineer from the very beginning. I used to design runways, make aircraft carriers for my toy planes, and draw out baseball fields…