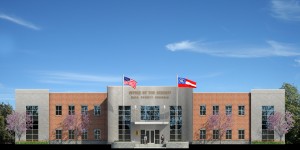 Hall County, Georgia – Hussey Gay Bell is pleased to release the formal rendering for Hall County’s new Sheriff’s Office.  Hussey Gay Bell is currently serving as the Architect of Record for this scope of work which consists of the design and construction of a new administrative headquarters which will be constructed at the 33-acre Government Center campus on Browns Bridge Road in Gainesville, Georgia.  Approximately $5 million has been budgeted out of SPLOST VI monies to fund the proposed 50,000 SF, three-story building which will replace the existing headquarters currently located at 610 Main Street in downtown Gainesville, the site of the old county jail.

The project duration is expected to be 18-20 months with final completion in early 2016.