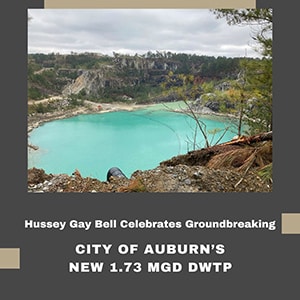 Like many communities in north Georgia, the City of Auburn has long experienced water shortages in times of drought. In 2010, city leaders began to formulate a solution to this problem by devising a system that diverts local river water to an empty rock quarry during times of abundant winter rainfall. This plan developed into a complex design to pump and store water, as well as build a new drinking water treatment plant to provide the city with drinking water and protection against drought conditions. The adjoining City of Winder experienced similar challenges and an agreement was reached to share the facilities and expenses associated with providing both communities more water security.

Mr. Jim Aton, PE, Project Manager and an initiator of utilizing the quarry said, “The realization of this long-anticipated project represents years of planning, design and collaboration between multiple factions. It is made possible only through a united vision of community leaders and stakeholders. Our firm takes pride in its role in bringing this vision to reality.”

Duluth-based civil engineering firm, Hayes James, acquired by regional planning and design firm, Hussey Gay Bell, in the spring of 2022, has worked with both Cities for more than 10 years performing studies, preparing grant applications for funding and working with Georgia’s Environmental Protection Division (EPD) on withdrawal permitting. The firm recently completed designs for the new DWTP and will remain engaged in the project through construction and startup.

Marietta, Georgia-based, Heavy Constructors commenced construction on the plant earlier this summer with construction projected to reach completion by March 2024.