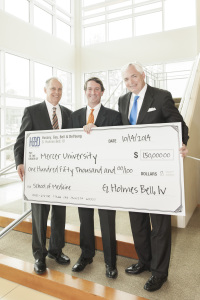 Savannah, Georgia – Mercer University President William D. Underwood today announced a $150,000 gift commitment to the University by G. Holmes Bell, IV, PE – Hussey Gay Bell CEO & Chairman – an alumnus and graduate of Mercer University’s School of Engineering. The gift brings the University a step closer to its goal of expanding its School of Medicine M.D. and Ph.D. programs from Macon to Savannah.

“This is an extraordinary commitment from one of Mercer’s most loyal supporters,” Underwood said. “It builds on the Bell family’s history of generosity to Mercer. This latest gift, which supports the expansion of Mercer School of Medicine’s Savannah facilities, is a testament of our alumni’s commitment to Mercer, and I am deeply grateful.”

The project consists of the renovation, design and construction of more than 60,000 SF of space on the campus of Memorial University Medical Center. Once completed, it will house medical and clinical education, including simulation rooms, an auditorium, medical library, classrooms and student support. The facility is expected to be occupied in the fall of 2015.

“Mercer is unsurpassed in the quality of its graduate and undergraduate education, and I strongly support the University’s goal to make that extraordinary experience available to more students than ever before with this expansion of programs in Savannah,” Bell said. “I hope my commitment will inspire other alumni, friends and families to support the funding for these critical projects.”

Already among Mercer’s donors, the Bell family previously gifted one of Macon’s most historic buildings, a 10,000 square foot Greek Revival, once used by the Allman Brothers Band for their debut album photo cover, to Mercer University. The Bell House, which is listed on the National Register of Historic Places, was gifted to the University in 2008 to benefit its School of Engineering and School of Music by the Bell family in memory of Amanda Hancock Morris Bell. The facility opened last month as the new home of Mercer’s Robert McDuffie Center for Strings, following a year-long extensive renovation.