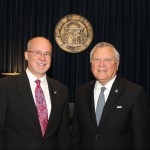 Eric Johnson, President of Hussey Gay Bell, was sworn in on Thursday.  Appointed by Governor Deal to the Georgia Tourism Foundation, Mr. Johnson will serve on the Board of Directors. The mission of the Georgia Tourism Foundation, under the administration of the Georgia Department of Economic Development, is to increase the economic strength of Georgia by promoting tourism through public/private partnerships. The current board consists of representatives of 10 Georgia Authorities, DNR and GDEcD (Chair), seven appointed private sector members and 15 non-voting advisors. In addition to this commitment, Mr. Johnson serves on the Board of Directors of the Georgia Department of Economic Development, the Savannah Economic Development Authority, and Union Mission, Georgia Regents University’s Planning and Development Committee, the Armstrong Atlantic State University Foundation, the Georgia Cities Foundation and serves as Chairman of the Board of the new World Trade Center Savannah. He served 17 years in the Georgia General Assembly in both the House of Representatives and Senate. He was the Senate Republican Leader for four years and President Pro Tempore of the state Senate for six years.