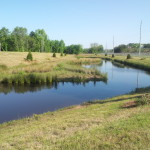 Savannah, Georgia – On April 22, 2014, Georgia Ports Authority unveiled its new, one-of-a-kind wetlands project. Hussey Gay Bell served as the site/civil engineer for this 14-acre project with a total project cost of nearly $4 million.  The project features the conversion of unused land into a man-made wetland designed to filter pollutants from rain water before it goes into the Savannah River. Located on the Garden City Terminal between the docks and the Norfolk Southern rail yard, the newly installed wetlands can treat 100 million gallons of water a year, while creating a natural wildlife habitat along Georgia Highway 25. The wetlands include nearly a mile of littoral shelves and are composed of native vegetation, including bald cypress, cord grass and soft rush, while supporting such diverse wildlife as fish, amphibians and birds.