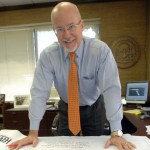 “Since we were granted a World Trade Center license, we’ve been quietly doing our due diligence and developing a plan,” Grant told the SEDA board and advisory council at their regular monthly meeting. “Now we’re moving into a soft launch mode, developing partnership packages, a website, working with the Georgia Department of Economic Development and exploring business trade missions.”

The goal of World Trade Center Savannah, Grant said, is to be a regional economic development structure that addresses global trade.

“We have been deliberately taking our time with making decisions as we slowly pursue the best way to set this up,” he said.

WTC Savannah is one of more than 300 such centers in 98 countries, each with its own business plan but all working to help area businesses conduct profitable international trade.

Eric Johnson of Hussey Gay Bell & DeYoung will chair the board, while Scott Center will serve as vice chair. Other board members include Brooks Stillwell, Cliff McCurry, Thomas Hester, Chad Barrow, Anthony Phillips and Sylvester Formey.

Board members will serve initially for a one-year term, and the board will expand to include regional representatives.

Weathers will be the organization’s president and CEO.

Groundbreaking Held for BMW Dealership
Congratulations to our Pride of Pooler 5K Participants!