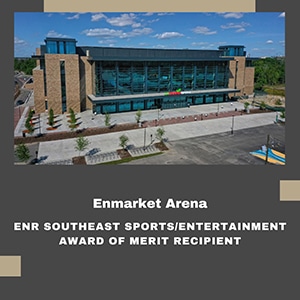 Savannah, GA – Hussey Gay Bell has received an ENR Southeast Award of Merit within the Sports/Entertainment category for Enmarket Arena. As a 2022 Best Projects awardee, Enmarket Arena was acknowledged for its innovative ideas, quality of work and ability to overcome challenges and was recognized as one of 31 winners from 93 submissions.

The Enmarket Arena represents nearly 20 years of efforts to construct a first-class, sustainable arena that provides a flexible and usable sports and entertainment venue to the public. Originally funded by the City of Savannah’s 2014 SPLOST 6 program, in 2019, the City selected the Perkins & Will team to design the 9,500-seat, 215,000 SF arena. The magnitude of the project also required the design and construction of a variety of civil improvement projects – on and offsite utilities, upgrades to existing infrastructure, roadway systems improvements, grading/drainage/erosion control for vertical facilities inclusive of the 215,000 SF arena and 400-space parking structure and more – to be delivered in tandem, which required immense design and phased construction coordination by Hussey Gay Bell who served as the Lead Civil Engineering firm for the project. Select improvements of impact included design of 3,000+ LF of utilities, the widening of an existing on-site canal, installation of 6,000+ LF of 30-inch Fusible PVC installed by Horizontal Directional Drill (HDD) at a depth of 100 feet below existing grade and the widening and reconstruction of two site-bounding active roadways.

Enmarket Arena was delivered via a fast-track, CM-at-Risk method via a joint venture of AECOM Hunt with overall project management provided with Jones Lang LaSalle (JLL). Despite being designed and constructed during the Covid-19 pandemic which created labor shortages and supply chain issues for materials and equipment, the project team was able to deliver the project on time and within budget.

The development of the new $165M arena site is considered the catalyst project in an overall effort to develop the entire surrounding Canal District – a 55-acre area to the west of Savannah’s historic downtown core that presents the opportunity to reimagine the Canal District to the west of West Boundary Street, creating a vibrant new center of activity. The multi-phase project aims to revive an under-appreciated canal and expand Savannah’s economic vitality.